The 1911 pistol has been an American Classic since it’s introduction, but size and weight have kept them from becoming the first choice for a concealed carry pistol. The Dan Wesson ECO is an exception to this rule. The Dan Wesson ECO can best be described as a 9mm, aluminum framed Officers Model 1911 pistol with a bull barrel. But I’m getting ahead of myself.

The 1911 style of pistols has always been identified using the Colt nomenclature. Colt has named their 1911 pistol lines by the length of their barrels and size of their frames. Colt named the full size 1911 pistol with a 5” barrel the Government Model. The mid size full frame with the 4.25” barrel was named the Commander and the reduced frame with the 3.5” barrel was named the Officers Model. These names have stuck in the gun world. Although other gun manufacturers don’t use these names for their 1911 pistols, gun owners seem to use these names for 1911 pistols that hold similar specifications as the Colt models.

Dan Wesson uses specifications similar to the original Colt Commander but they have taken several steps further on the original Colt design to develop a new reliable, lightweight, accurate and aesthetically pleasing 1911 pistol.

The barrel of the Dan Wesson is a bull barrel, which means that the diameter of the barrel fits directly into the slide without the need of a barrel bushing. The barrel in the Dan Wesson ECO is ramped and fully supported meaning the feed ramp is built into the barrel and the frame is milled to fit the extended ramp. By using a ramped barrel the chamber supports a larger portion of the cartridge, called fully supported chamber.

The recoil system uses a full guide rod and a flat recoil spring similar to those found on Glock pistols. The recoil system also includes a reverse plug that fully supports the bottom of the barrel. This system makes the take down and field stripping of the Dan Wesson ECO a fast process.

When you add all these details together, the shooter gets a classic 1911 carry pistol with all the touches found on custom made pistols, at the price of a production pistol. The Dan Wesson ECO pistols are available in .45 ACP and 9mm Luger.

Our test pistol was the 9mm Luger version. My first impression of the Dan Wesson ECO was very favorable in it’s controls and ergonomics. The slide to frame fit is precise and tight, but freely moves without slop. The barrel fit to the slide and to the frame is also tight and very precise. All these features indicate accuracy and reliability.

The Dan Wesson ECO pistols start with a lightweight aluminum frame with fine, 25 line-per-inch checkering on the front strap. The frame is cut for a beavertail grip safety and cut for a ramped barrel. The finish is hard anodized for extra protection, strength and corrosion resistance. The main spring housing is slightly rounded along with the frame for a more comfortable grip and ease of concealment.

The Dan Wesson ECO also features a solid mid-length aluminum trigger pad with vertical serrations and a set screw for over-travel setting. The ECO has an extended single-sided thumb safety for easy activation and deactivation of the safety. The frame is finished off with a set of custom VZ brand G10 grips for added strength and shooting comfort.

The steel slide has it’s own distinctive look. Instead of the standard rounded top end, the top of the slide has three distinctive sides with sharp angles. The top of the slide is flat with lengthwise serrations and two sharp angles come out of the flat top to form an interesting tri-side top to the slide. The front sight is a night sight precisely dovetailed into the front of the slide. The rear sight is a low profile fixed night sight with one night sight lamp and horizontal serrations on the rear of the sight to minimize reflections. The rear sight uses the classic Novak sight cut. Any sight with the Novak configuration can be used as a suitable replacement if the shooter so desire it.

Enough about specifications, it’s time to take the Dan Wesson ECO to the range. So we did. With the weather cooling down in Arizona, rage time becomes more pleasant and testing time gets longer. We tested the Dan Wesson ECO with our favorite ammunition, the Asym Precision 115 gr JHP and the Asym Precision 147 gr FMJ. We took our new Pact Model 1 XP chronograph to the range and ran 5 shot strings with each kind of ammunition and then proceeded to calculate power factor.

The Asym Precision 115 gr JHP gave us an average muzzle velocity of 1091 fps with a power factor of 125.47. The Asym Precision 147gr FMJ gave us a muzzle velocity of 896.1 fps for a power factor of 131.73. These muzzle velocities are standard for 9mm ammunition fired from a shorter 3.5” barrel. Our next test was reliability. We fired a substantial amount of ammunition through the ECO without a single problem or issue with firing, feeding, extraction or ejection. This kind of reliability with different kinds of ammunition is a definite plus when choosing a concealed carry handgun and the ECO takes it.

Our final test was accuracy, due to the primary purpose of the ECO is the concealed carry market, we tested the ECO at a distance of 10 yards, which is actually a longer distance than this pistol would be used in a real life scenario. We did a double test with the ECO. Both Scott and Muneki fired the pistol with both kinds of Asym Precision ammunition, and their results were very similar. Like on previous tests with these two kinds of ammunition, we found that the 147gr FMJ ammunition performed better than the 115 gr JHP, but then again, accuracy differs with ammunition brand, style and bullet weight and shape.

After all these tests, I’m having one big problem, the fact that I have to return this gem to its owner. Even though I am a fervent admirer of the striker fired polymer pistols for concealed carry, I found that the Dan Wesson ECO might have won me over with its accuracy, weight and reliability. In my humble opinion, the Dan Wesson ECO is a perfect choice for the most discerning shooter and 1911 aficionado. Even if the shooter is not already a 1911 aficionado, after firing the ECO, they will become an ardent fan of the 1911 platform and the ECO. The Dan Wesson ECO might be the last 1911 concealed carry handgun any shooter might ever need.  Visit the Dan Wesson Website for more information.

In this episode we take a look at the Springfield Armory Hellcat’s Adaptive Grip System and how it affects your grip and comfort, we did a couple of Mag Dumps with it to show you how comfortable it is to shoot fast and accurately. #GSR #Hellcat #Springfield

In this episode of Gun Stock Reviews, we test the ballistic performance of Federal Punch .22 LR Ammunition with the Taurus Barkeep. How will this new Personal Defense Ammunition perform with the 3″ Barrel of the Heritage Barkeep? Watch and check it out. 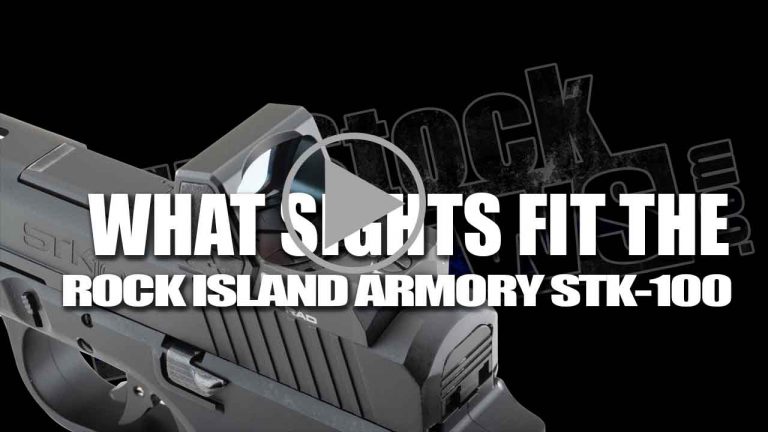 In this episode of Gun Stock Reviews, we ask the question, what red dot sights fit the Rock Island Armory STK-100?

In this episode of Gun Stock Reviews, we take a quick first look at the S&W Shield 2.0 Performance Center 4″ Optics Ready 9mm. These come is several flavors, calibers and configurations, we tested the optics ready with and without ported barrels. Great pistol configurations, I would still do some modifications to fit my taste…